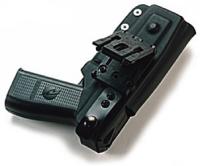 WESTWOOD, CA (AP) — A student shocked with a Taser gun by a campus police officer after refusing requests to show his ID card thought he was being singled out because of his Middle Eastern appearance, his lawyer said.

Attorney Stephen Yagman said he plans to file a federal civil rights lawsuit accusing the UCLA police of ”brutal excessive force,” as well as false arrest stemming from the Tuesday night incident at a campus library.

Yagman’s client, Mostafa Tabatabainejad, was shocked as police did a routine check of student IDs at the University of California, Los Angeles Powell Library computer lab.

Yagman said Tabatabainejad declined to produce his school ID because he thought he was being targeted because of his appearance. The 23-year-old senior is of Iranian descent but is a U.S.-born resident of Los Angeles.

Tabatabainejad eventually decided to leave the library but fell limp on the floor when an officer escorting him out wouldn’t take his hand off him, Yagman said. Tabatabainejad didn’t want to participate in what he considered was a case of racial profiling, the lawyer said.

The student started yelling and screaming after police started using the Taser to gather attention and get the officer to stop, according to Yagman.

”Generally, police don’t want to do their dirties in front of a lot of witnesses,” he said.

But police have said Tabatabainejad encouraged others at the library to join his resistance, and when a crowd began to gather, an officer used the stun gun on him. They said it was long-standing policy to ask students to show ID at libraries late at night to keep the campus safe.

Tabatabainejad was arrested for resisting and obstructing a police officer and later released on his own recognizance.

The incident was recorded on another student’s camera phone and showed Tabatabainejad screaming while on the floor of the computer lab. It was the third incident in a month in which police behavior in the city was criticized after amateur video surfaced. The other two involved the Los Angeles Police Department.